“New York City, 1741. A growing population of slaves and indentured white laborers had city authorities on edge. When a series of fires broke out in March and April, suspicion fell on a conspiracy of these lower classes. A white servant, with promise of freedom and a reward, implicated about a hundred blacks and whites in a plot to burn out the government and take over the city….” – http://wp.me/p2lRWi-3C

Preface: Before I begin this blog series, I wanted to note that I became interested in this part of NYC and American history as I have been working on my own research. I’m writing a thesis paper that involves aspects of early physical anthropology. This subject matter, inevitably, led me to the natural sciences and early medical history. Continuing to follow these leads, I stumbled upon grave robbing, and landed in NYC. I really wanted to share some of my discoveries with you, but in order to do it in a way that creates meaning I needed to provide history and context for a rather intense time in America’s past. So, in celebration of African American history, NYC, and the power of interdisciplinary collaboration, I present this 4 part blog series on the African Burial Grounds of NYC.

In 1991, an archaeological field survey team proceeded to inspect an area of land in lower Manhattan to prepare for a new federal building. As the team investigated the land, they uncovered what appeared to be skeletal remains and the traces of a coffin. The discovery brought the project to a halt. This was monumental. They had unearthed an African burial ground and the remains for 419 men, women, and children. 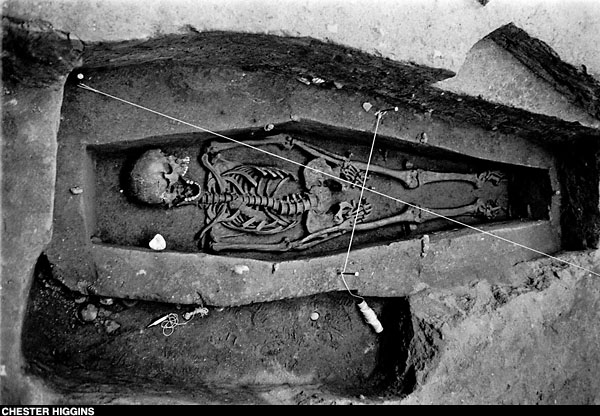 This image provides a lot of detail and information that I’ll be happy to help deconstruct. In archaeology, burial and funerary practices can reveal a lot about a community and its culture. Sometimes, even more so than the practices of the living. This body was laid to rest very thoughtfully and with careful intention. It also appears that the person was buried in a wooden coffin. The shape of the coffin remains, but wood decomposes fairly quickly. This information alone implies that great care was taken with the deceased.

The head of the body was made to face east, which indicates spiritual or religious ritual. This practice was observed within Christianity, as it is believed that when Jesus comes back, he will come from the east. However, this tradition began with Pagan burials, so that their loved ones would face the rising sun.

The bodies were also found with trinkets, jewelry, and objects of affection or loyalty.

The skeletons also told the stories of the types of lives that these Africans and African Americans lived. The bones showed clear signs of a lifetime of intense, hard work, nutritional stress, and shortened lives. Many of these people were slaves. The Dutch West Indie Company imported the first slaves into New York around 1626. By the 1700s, thousands of Africans had been shipped into New York to help build the area that would become one of the most important cities in the world.

Archaeologists, historians, community activists, and city workers continued to piece together the story of the first Africans in NY. Although history tends to paint the “North” as having been rather anti-slave, or a place where slaves could be free, the discovery of this burial ground meant a different reality was emerging. Slaves under Dutch rule did have some rights  and protections, including restrictions against forms of punishment like whipping. But when the English acquired New York, conditions around slavery would become much more harsh.

Considering that many of the individuals in the cemetery were slaves, it might not have surprised anyone to learn that they were buried together. But the placement of the burial ground gave added context to the mindset of the ruling class.

This 1776 map shows that the African burial grounds were outside of the city limits. In 1697, after the British had taken over New York, the city passed a law to make it illegal for Africans to be buried within the city limits or on church grounds. 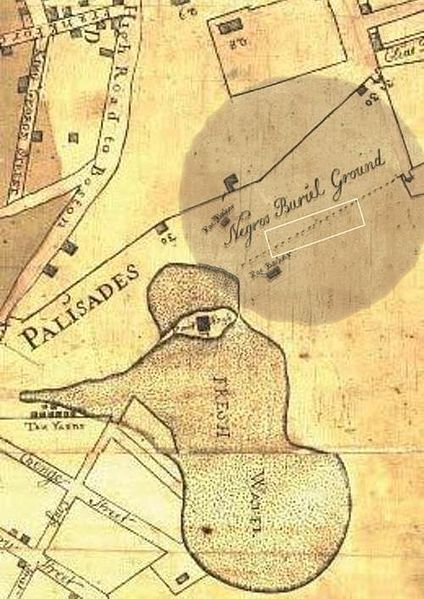 As the excavation continued, it is estimated that 10-20,000 bodies were buried within the African burial grounds.
If you’re now asking, “if only 419 were found, what happened to the other bodies?” That is an excellent question! And, I will tell you more about that in part two of this 4-part blog series in celebration of African American History!
Here are some additional resources that helped to inform this installment:

© 2010-2020, Myeashea Alexander and The Rockstar Anthropologist. All rights reserved

You can find out more about which cookies we are using or switch them off in settings.

This website uses cookies so that we can provide you with the best user experience possible. Cookie information is stored in your browser and performs functions such as recognising you when you return to our website and helping our team to understand which sections of the website you find most interesting and useful.

Strictly Necessary Cookie should be enabled at all times so that we can save your preferences for cookie settings.

If you disable this cookie, we will not be able to save your preferences. This means that every time you visit this website you will need to enable or disable cookies again.